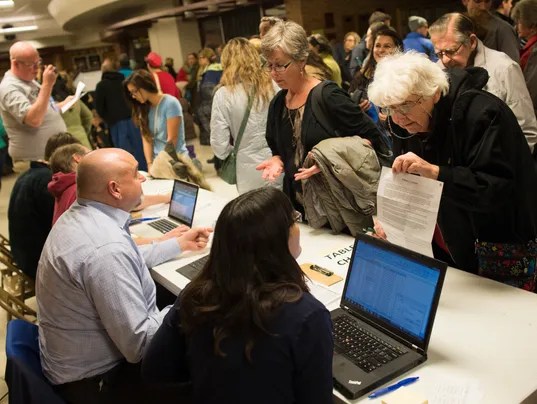 Democratic voters outside Fort Collins’ Lincoln Middle School took to the trees Tuesday night to participate in their party’s caucus.

The overflow crowd at the school spilled outside to throw their support behind presidential hopefuls Hillary Clinton and Bernie Sanders. Some took to the trees outside the school so their voices would be heard. Shortly before 8 p.m., Colorado Democratic State Sen. John Kefalas tweeted that he was part of “historic” crowds at the school, “preparing to vote under stars.”

Poudre Fire Authority Capt. Holger Durre estimated a crowd of 1,500 had gathered at Lincoln, which could hold 320 people for the caucus. Firefighters working crowd control were allowing one person in for every one person who left the building shortly before 8:30 p.m.

Across Fort Collins from Lincoln Middle School, PFA firefighters kept a watchful eye at the crowd gathered at Rocky Mountain High School, site of multiple Democratic precincts. By 7:20 p.m., some voters were leaving RMHS, citing concerns of unsafe crowds and a lack of direction from event organizers. The crowd at RMHS began to wrap up its work and clear the site by 8 p.m.

he scene in Fort Collins was mirrored across Colorado on Super Tuesday, as the Associated Press reported Democrats coming out in force at some Denver and Boulder precincts. Molly Ison sat in a camping chair in an around-the-block line waiting to caucus for Sanders at a central Denver middle school.

At Denver’s Hamilton Middle School, a line stretched for blocks by 6:30 p.m., and voters were still waiting outside by 7:50 p.m. Inside, a person began playing “Imagine” by John Lennon on a piano while people sang along.

We know these are true (29 Photos)