A historic Roosevelt Row auto-dealership building could be incorporated into a 19-story apartment tower as part of a downtown Phoenix high-rise proposal that’s creating concern among city preservationists.
Wochit

The 1947 Stewart Motor Co. building — more recently Circles Tapes and Records –is slated for 19 stories of apartments. The circular front would be preserved and the rest demolished, raising concerns from historic preservationists as the developer negotiates with Phoenix.(Photo: John Samora/The Republic)

A historic Roosevelt Row auto-dealership building could be incorporated into a 19-story apartment tower as part of a downtown Phoenix high-rise proposal that’s creating concern among city preservationists.

At stake is the 1947 Stewart Motor Co. building, which more recently housed Circles Discs and Tapes. It’s easily recognized by the curved glass window on Central Avenue and McKinley Street that once showcased Studebaker vehicles on a rotating turntable.

That iconic façade would be saved as part of Circle on Central, a 310-unit project being considered by the city. The rest of the building could be demolished under plans submitted by developer Aspirant Development LLC, part of the Empire Group of Companies.

The company requested a total demolition permit for the building Tuesday, according to Phoenix Historic Preservation Officer Michelle Dodds. A routine hold on that application ends after three business days, she said, which means the city could issue the permit after 5 p.m. on April 4.

A project representative said no changes to the building are imminent, though, as community discussions continue. The developer is asking for a city tax break on the construction, and the application outlines preserving the most recognizable and “historically important” parts of the structure.

To preservationists, though, the plans dash hopes of rehabilitating the entire vacant space, which  includes what was once a machine shop and realty office. The building has no historic designation that would protect it from alteration, but it does meet the criteria for a local and national listing, according to the city’s Historic Preservation Office.

And the tax incentive sought by the company could give the city and community extra say in what’s approved. Some are hopeful those talks will lead to a compromise or alternate design, said Jim McPherson, board president of the Arizona Preservation Foundation.

“To destroy an asset with public funds, in the minds of many people, would be a travesty,” he said. 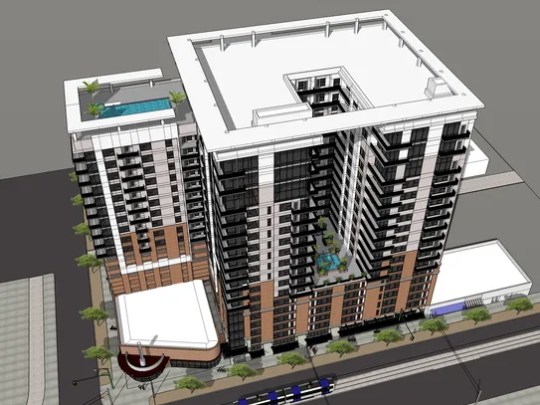 A rendering of the apartment building proposed for the 1947 Stewart Motor Co. building in Phoenix. (Photo: Empire Group)

Circle on Central could decide the fate of a building that has concerned historic preservationists since it was left vacant in 2010.

The building has been eligible for designation on the local and National Register of Historic Places for more than three decades. The city’s attempt to list it in 2004 was unsuccessful due to opposition from the previous property owner.

Under state property law, Phoenix is limited in its ability to protect historic buildings.

Original advertisements for the international-style Stewart Motor Co. referred to it as “the city’s first truly postwar building,” said Kevin Weight, a planner with the city’s Historic Preservation Office. It’s featured in a Phoenix book of “Midcentury marvels.”

Plans for new apartments would incorporate about 6,000 square feet of the original building as part of the complex’s street-front restaurant and retail space.

The 1.24-acre site would include seven levels of parking under 12 stories of market-rate apartments, according to the proposal. Units would average 820 square feet.

Proposed amenities for the complex include a fitness center, yoga studio and outdoor lounge.

If built as planned, the feel of Stewart Motor Co. would be changed by the towering structure, Weight said. The integrity of the structure — a criterion for historic designation — likely would be compromised, he said.

And culturally, the building is symbolic of Phoenix in the boom years after World War II, said Anne Stewart Zell, daughter of original owner Jack Stewart. The August 1947 grand opening attracted thousands of people to one of the few buildings with air conditioning, said Zell, who was 9 years old at the time.

Plans for the development are still conceptual, said Larry Lazarus, a land-use attorney representing the project.

The team requested a demolition permit so the project can move forward, but additional meetings with community members are scheduled for next week, he said.

“We can always modify or withdraw (the permit),” Lazarus said.

Discussions also are underway for a development incentive — called a government property lease excise tax — for the estimated $64.3 million project. The tool allows developers to transfer land to the city and make lease payments, saving money on property taxes.

Negotiations on an agreement are ongoing, according to Cynthia Weaver, spokeswoman for the Community and Economic Development Department.

Circle on Central would add to the residential options Phoenix needs for a viable downtown, Lazarus said. Saving parts of the Stewart Motor Co. building already increases the cost of the project and challenges the design of a parking structure, according to the proposal.

The team also is willing to negotiate other aspects of the possible tax incentive agreement, like reducing rents on some units as part of a workforce housing component, Lazarus said.

A compromise will have to respect land rights, Lazarus said, and saving the entire building would limit the site’s uses.

“You wouldn’t be able to develop the property,” he said.