Jason Dalton is accused of killing six people and injuring two others in a random shooting spree across Kalamazoo, Michigan. 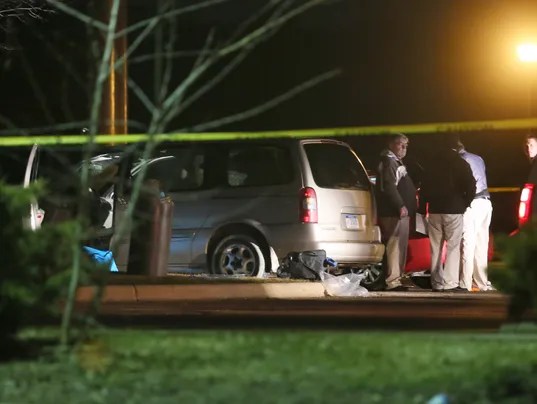 Police investigate the scene early Feb. 21, 2016, where people were shot in vehicles outside a Cracker Barrel restaurant in Kalamazoo, Mich.(Photo: Mark Bugnaski/Kalamazoo Gazette via AP, AP)

The man suspected of shooting six people to death in Michigan appeared to carry on a normal life with his longtime wife and two school-age children.

Jason Dalton, 45, lived with his wife of at least 15 years, Carole Dalton, and their children, ages 15 and 10, on a quiet rural road in western Michigan, neighbors and associates told USA TODAY.

“It’s a total shock. They’re a very nice family,” said Colleen Benjamin, whose husband works with Carole Dalton at the Kalamazoo branch of Raymond James financial advisers. “I never would have suspected anything.”

Dalton was an Uber driver and passed a background check, the company said Sunday. WOOD-TV reported that Dalton drove fare-paying passengers on Saturday, apparently in between the shootings, which occurred sporadically between 6 p.m. and 10 p.m. Saturday in three locations. He was taken into police custody early Sunday without incident.

A woman posted on Facebook Saturday evening that “an Uber driver named Jason” recently drove her fiance, and “sideswiped a car blowing through a stop sign.”

The Daltons lived in a rural community outside Kalamazoo, a city of 75,000 about 150 miles west of Detroit. Property records indicate they bought their ranch-style house in 1997.

Jason Dalton owned several cars, including a Classic Camaro, said Gary Pardo, who lives a couple miles from Dalton and whose parents live across the street from Dalton. “His Friday nights would be spent in his garage, working on his cars. He’d take them out, rev them up loud and drive them around,” Pardo said. “That’s nothing unusual out where we live.”

Carole Dalton has worked for Raymond James since 1999 and received an administrative assistant certificate from Kalamazoo Community College, according to her company profile.

“She’s wonderful and my heart goes out to her,” Benjamin said. She said Jason Dalton had worked as an insurance adjuster.

“The guy was a family man,” Pardo said. “He stuck with his family, and we never noticed anything strange.”

Email inventor Raymond Tomlinson dies: 5 things to know, such as why the @ symbol

Clinton says Snyder should resign or be recalled