John T. Haynie, 69, of Las Cruces, N.M., was charged with attempted murder, accused of shooting a plumber March 31, 2016, who was working on the sink at his apartment.(Photo: Doña Ana County Detention Center)

LAS CRUCES, N.M. — A plumber trying to fix a sink in a customer’s home is in critical condition Friday after being shot in the stomach, and the man accused of pulling the trigger was arrested in his apartment after a two-hour standoff.

The 54-year-old victim, whose name was not released, managed to escape shortly before 6 p.m. MT Thursday and called 911 while attempting to drive away in his Roto-Rooter van, police said. Emergency responders found him a couple of blocks away and tended to his injuries before transporting him to University Medical Center in El Paso.

At the apartment, officers attempted to make contact with tenant John T. Haynie, 69, who was inside and believed to be armed. A hostage negotiator said that Haynie appeared to be intoxicated, according to court documents made available Friday.

Shortly after 8 p.m., he was removed from his apartment and taken to the Las Cruces Police Department for questioning. Haynie told officers that he “blacked out” and could not remember what happened but also told them he had had only had two beers, police said.

Inside the apartment, officers found a 0.22-caliber revolver and blood. Haynie was booked into Doña Ana County Detention Center on a charge of first-degree attempted murder, which carries a maximum sentence of up to nine years in prison and up to $10,000 in fines.

Before 11 a.m. Friday, the victim already had undergone surgery, according to his daughter.

“Anybody that has said anything has immediately said, ‘He’s the nicest man in the world. Why would anyone shoot him?’”

“He’s had surgery and there was organ damage, but he’s doing fine,” Kendrah Vallee said. “The family is with him currently, and we are asking for privacy.”

Vallee said her father would be hospitalized for at least 48 hours. She said she and other family members were stunned by the shooting.

“Anybody that has said anything has immediately said, ‘He’s the nicest man in the world. Why would anyone shoot him?’ He’s the gentlest man you’ll ever meet. He’d do anything for anyone,” she said. “So we are actually 100% baffled right now about why this happened to him.”

Vallee said her father has worked for Roto-Rooter for about six years and has lived here for more than 20 years.

Investigators have not released a motive.

Haynie initially was held without bond, but in a Friday hearing, a judge set it at $75,000. As of Friday night, he had been released, according to jail records. 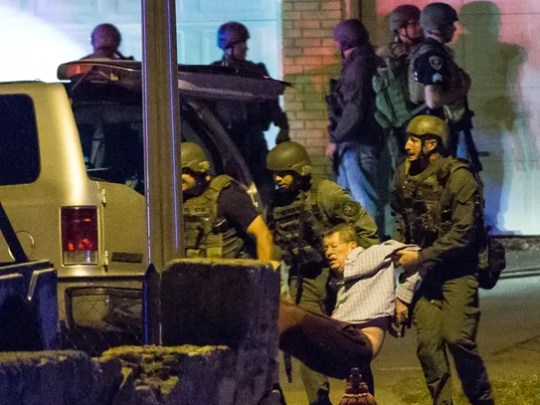 Las Cruces, N.M., SWAT team members carry shooting suspect John T. Haynie, who was unable to walk on his own, March 31, 2016, after he barricaded himself his apartment in Las Cruces, N.M. He is accused of shooting a plumber who was working on his sink. (Photo: Robin Zielinski, Las Cruces (N.M.) Sun-News)