Police investigate the death of Christine Woo, who was found in her Honda Pilot in a Target parking lot in McKinney, Texas, on March 31, 2016.(Photo: WFAA-TV, Dallas-Fort Worth)

DALLAS — A Frisco mother who had been missing for days was found dead in her sport-utility vehicle in a McKinney parking lot Thursday evening.

Her three children were found alive inside the vehicle and taken to a nearby hospital.

Christine Woo and her children — Lauren, 5, Nathan, 3, and Leah, 16 months — had been missing since Monday.

Brandon Woo said his wife and children had been missing since he came home from work to an empty house that day. He said he waited until Tuesday to report them missing because he said he thought he had to wait 24 hours to file such a report.

Police said surveillance video shows Woo and her children entering a Walgreens on Monday morning. She’s holding the youngest child in her arms. Her husband said credit card records shows she picked up a prescription for Leah’s eczema.

Credit card records also showed that she went to a Frisco McDonald’s at State Highway 121 and Custer Road.

Those two charges were the last time that she used their accounts, he said.

Earlier in the week, Woo said his wife was “a model mother, a model wife.” 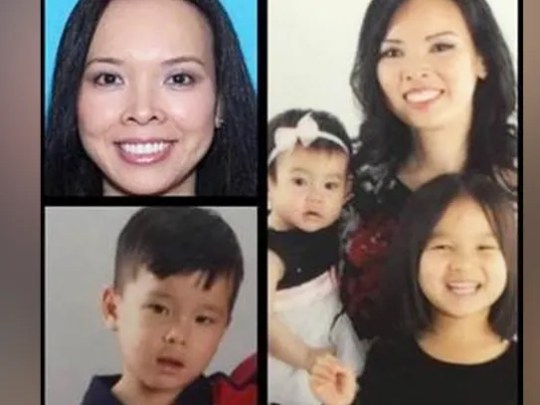 He said, “It wouldn’t make sense if she was just to leave on her own and that’s what kind of gives the impression that something bad happened.”

A Frisco Police deputy found Christine Woo and her children around 6:30 p.m. CT Thursday in a Target parking lot, police said. Christine Woo had been last seen driving the Honda Pilot, according to police.

The mother’s cause of death will be determined by a Collin County medical examiner. Frisco Police are leading the investigation. Before Thursday’s discovery, the department had said it had no evidence of foul play.