The Spartans star got the scissors out to celebrate the conference tournament championship Sunday in Indianapolis. Video by Joe Rexrode/DFP

Spartans wanted to win it for their coach, who just lost his dad, and their star, who sought redemption for last year 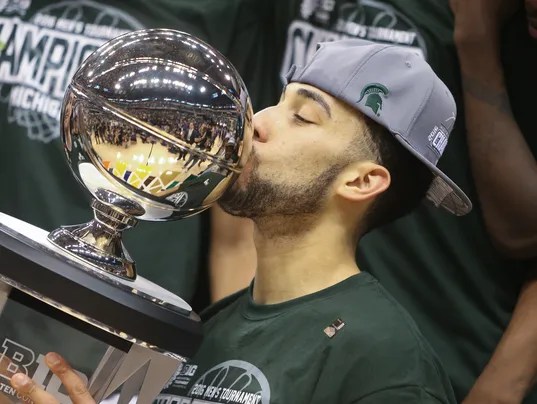 INDIANAPOLIS — The emotions spilled as freely as the confetti from the rafters at Bankers Life Fieldhouse. For one of the rare occasions in his life, words were scarce for Tom Izzo. The newly crowned Big Ten tournament champions needed a spokesman and the teary-eyed Izzo gave the microphone to the tournament’s most outstanding player, Denzel Valentine.

“It was hard because I kept thinking of my dad,” Izzo said. “It really started to hit me in the last minute of the game when I looked up to the sky and wished that he could’ve been here to see this.”

Carl Izzo died in December at age 90. But the Michigan State coach’s mother, Dorothy, was there and got the first hug from her son after he stepped off the Big Ten trophy presentation platform. She told him that his father would’ve certainly been proud of the newest addition of Michigan State basketball championship hardware.

The Spartans coach addressed the media after winning the Big Ten tournament title Sunday in Indianapolis. Video by Joe Rexrode/DFP

But it perhaps moved Izzo even more how his players shared similar thoughts with him in the immediate aftermath of Michigan State’s 66-62 victory over Purdue on Sunday.

“It’s a pretty cool thing when you’ve talked about a team looking at each other as though they were a family,” he said. “And that’s about looking out for each other when times are good or bad. It speaks to what a close-knit group of guys we have here.”

The Spartans wanted this game for their coach. They also wanted it for their captain.

Exactly one year ago, Michigan State had a Big Ten tournament championship in the hands of its best player. But Valentine threw away the ball in one of those inexplicable moments that time still can’t forgive. The Spartans lost to Wisconsin in overtime and a devastated Valentine sat crumpled in front of his locker long after the game ended. And while that moment served as the catalyst for the Spartans’ seventh Final Four since 1999 last year, there remained some unfinished business in Valentine’s mind.

He got it against the Boilermakers.

Valentine finished one assist shy of a triple-double (15 points, 10 rebounds and nine assists). The astute basketball judgment that betrayed him in those frantic final seconds last March in Chicago steadied a team that wouldn’t relent. No matter how hard the Boilermakers pushed and prodded them.

The Spartans senior star talks about how literally everyone contributed to MSU’s win over Purdue in the Big Ten title game Sunday in Indianapolis. Video by Joe Rexrode/DFP

“We used what happened last year as motivation for us coming into this game,” said Matt Costello. “We wanted to erase what happened before and we knew the only way we could do that was win the championship. But also win it the way we did, having to grind it out with tough defense and good decision making. It just shows how much ’Zel has improved as a player in the last year. He wasn’t going to let that define him.”

Valentine didn’t make any promises to the Spartans fans in the arena when he took the microphone following the trophy presentation. He simply said, “We’re not finished yet.”

The Spartans got the No. 2 seed in the Midwest region. They’ll get Middle Tennessee State in their opener Friday in St. Louis.

Those looking for anything to cry about will complain that they didn’t get a No. 1 seed, considering they’re the second-ranked team in the country. But this is one of those tournaments where there’s no point in debating the merits of the top seeds in relation to the No. 2 seeds. There’s not much separating the top eight teams in the tournament. Of greater importance is the overall difficulty of the region. And the Spartans might have the easiest road to the Final Four than any other serious contender.

The seldom-used backup forward was a big part of Michigan State’s win in the Big Ten tournament final Sunday in Indianapolis. Video by Joe Rexrode/DFP

There’s no shortage of confidence in Michigan State as the road turns more rugged. Valentine made it clear Sunday that there’s no cockiness in this team, qualifying comments he made a week ago that suggested he “guaranteed” a national championship.

“I didn’t guarantee it,” he said. “But as far as us having control of our destiny, that’s what I meant. I think with the way we’re playing, we could beat any team in the country. Our team does a really good job executing and playing hard down the stretch.”

And an even better job of having each other’s backs. These Spartans have become a tightly-bonded team in every sense of the description, tying together various emotions into a common purpose.