But the Vermont independent’s ability to stay competitive faces a major test — both mathematically and demographically — on Tuesday, when 11 states and American Samoa hold primaries.

At stake are 865 pledged delegates to the Democratic National Convention. That’s 36.3% of the 2,382 delegates needed to clinch the nomination.

Of those 11 Super Tuesday states, Sanders sees a path to victory in Colorado, Massachusetts, Minnesota, Oklahoma and his home state of Vermont, where he’s polling an average 75 points ahead of Clinton. He also expects to win significant numbers of delegates in the other six states, because Democrats award delegates proportional to a candidate’s share of the vote in each state.

One problem for Sanders: The Super Tuesday states where he sees possible victories offer only one-third of pledged delegates at stake that day. Clinton also is way ahead in support from superdelegates, the 712 unpledged elected officials and party leaders who decide on their own which candidate to back.

Even after his crushing defeat in the South Carolina primary Saturday night, Sanders said his campaign is “just beginning.”

“Now it’s on to Super Tuesday,” he said in a statement Saturday. “In just three days, Democrats in 11 states will pick 10 times more pledged delegates on one day than were selected in the four early states so far in this campaign. Our grassroots political revolution is growing state by state, and we won’t stop now.”

“He’s got to stay within striking distance of Hillary Clinton or else she’ll put the race away,” Wasserman said Thursday. “By our estimates, if Clinton were to match patterns of support she’s received in primaries to date, she would win between 75 and 100 more delegates than Sanders on March 1. That would mean that Sanders would need to win approximately 58% of the remaining pledged and undeclared superdelegates to tie Hillary Clinton by the end of the primaries. That’s virtually impossible to do.” 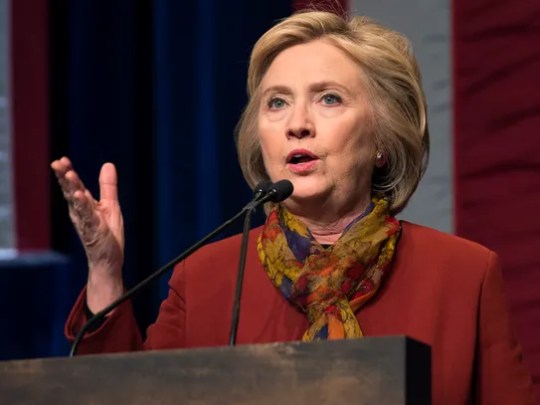 The Sanders campaign believes superdelegates will switch their allegiance as he amasses pledged delegates, and his supporters have launched independent campaigns designed to ensure that happens at the convention.

If Sanders leads in pledged delegates by the end of the process, “the pressure on the superdelegates not to go against the will of the voters is going to be enormous,” said Tad Devine, Sanders’ senior media adviser.

In the 2008 Democratic presidential race, about two-dozen superdelegates switched their support from Clinton to Barack Obama. But Clinton started that race with a much smaller lead in superdelegates than she has now, said Anthony Corrado, a government professor at Colby College in Maine.

“I think we’re not going to see major movement from the superdelegates who are already committed to Hillary, barring some extraordinary event,” he said.

Super Tuesday also will test Sanders’ ability to win support from large numbers of minority voters in southern states such as Texas, Georgia and Alabama. Minority voters have favored Clinton in national polls, and African Americans were key to her victory in South Carolina.

Sanders says his support among Latinos is growing. His campaign officials cite entrance polls showing he won the Latino vote at the Nevada caucus, which Clinton won overall. But Clinton campaign officials and others say those results weren’t reliable.

“If you can’t win non-whites in this party, you cannot win the nomination,” said Democratic strategist Joe Trippi, who ran former Vermon governor Howard Dean’s presidential campaign in 2004. “There’s just no way he keeps it close if he’s running this poorly among nonwhites. The issue isn’t which states can he win, it’s can he change that. They’re running out of time to do it.”

Clinton has received hundreds of endorsements from African-American and Hispanic elected officials and is counting on strong minority support as a firewall against Sanders. She’s pitching herself as the candidate most closely aligned with President Obama, who is popular among Democrats in states that will vote in March.

“As the campaign moves towards states with more diverse electorates in March, we expect Hillary’s strength among these groups will quickly translate into a major electoral advantage,” her campaign manager, Robby Mook, wrote in a Feb. 9 open memo.

At a recent Sanders rally in Norfolk, Va., Dominique Conway, 20, an African-American student at Hampton University who will vote in Virginia on Tuesday, said Sanders is more vocal than Clinton about issues affecting black voters.

He hasn’t been afraid to call for criminal justice reform or “say the word black,” she said.

But she also said many African Americans don’t know Sanders well. Conway’s age group — where Sanders has strong support — learned about him through social media, a major focus of his campaign’s outreach efforts.

“But my parents? They’re not on Twitter,” she said. 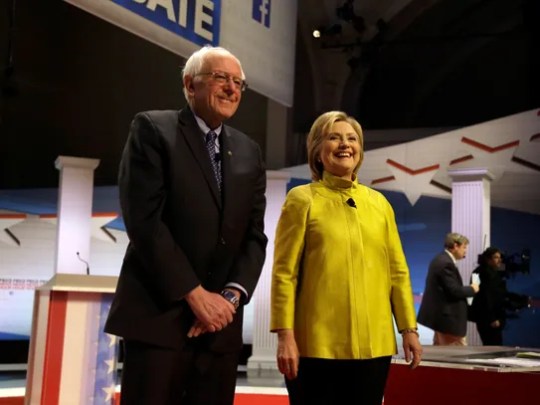 Democratic presidential candidates Sen. Bernie Sanders and Hillary Clinton take the stage before a debate at the University of Wisconsin-Milwaukee on Feb. 11, 2016. (Photo: Tom Lynn, AP)

He aims to connect with minority voters through his personal biography as the son of a Polish immigrant and through support from unelected leaders, including former NAACP president Ben Jealous and movie director Spike Lee, Devine said.

Tuesday likely will be Clinton’s “best day on the calendar,” but Sanders aims to win over the long haul, Devine said. He predicted “decisive showdowns” in Michigan on March 8, Wisconsin on April 5, Pennsylvania on April 26, and in other states.

The campaign will make a big effort in Kansas and Nebraska before their March 5 caucuses, and California could decide the election when it votes in June, he said.

“We’ve got a lot of time,” Devine said. “By the time we get to California, I think we’ll be winning Latino voters by a significant margin and I think we will not have these kinds of deficits with African-American voters.”

Security News This Week: Hackers Spoil Their $1 Billion Bank Heist With a Typo