Home > HOME > Suspect in Kalamazoo shootings was an Uber driver

The man who police said randomly killed six people and wounded two others in Kalamazoo on Saturday evening was an Uber driver and may have been picking up fares as he continued on his shooting rampage. .

Jason Dalton, 45, was arrested early Sunday after a massive manhunt in response to the shootings that began about 6 p.m. Saturday, Michigan State Police Lt. Dale Hinz said. Dalton surrendered without incident but had weapons in his vehicle.

A total of eight people were shot in three locations as the gunman drove around apparently picking his victims at random, Kalamazoo County Prosecutor Jeff Getting said.

Dalton next allegedly shot and killed two people at 10 p.m. who were sitting in their cars at a car dealership. About fifteen minutes later he killed four people and wounded a 14-year-old girl at a Cracker Barrel, police said.

Uber released a statement late this morning confirming that Dalton was an Uber driver and said he had passed a background check.

“We are horrified and heartbroken at the senseless violence in Kalamazoo, Michigan,”  Joe Sullivan, chief security officer at Uber, said in the statement. “Our hearts and prayers are with the families of the victims of this devastating crime and those recovering from injuries. We have reached out to the police to help with their investigation in any way that we can.”

A girl – whose name is not being used by the Free Press — on Saturday posted on Facebook at 5:33 p.m. that her boyfriend was picked up by an Uber driver named Jason who was driving erratically, blowing through a stop sigh and sideswiping another car. That post came up just about a half hour before the killing spree started.

She posted a photo of the man, who matches the police mug shot of Dalton, and said he was driving a Chevrolet Equinox SUV. Kalamazoo Gazette photos later show police searching an Equinox.

The girl said 911 was called “but surprisingly they didn’t seem all that concerned.

“Hoping this man will be arrested or hospitalized soon if he has a medical condition causing his behavior,” she said. The Facebook post has since been deleted but the Free Press obtained a copy of it.

Police believe Dalton began the attacks at an apartment complex, shooting a woman four times in the parking lot. The woman is in serious condition, police said.

Police originally reported that the 14-year-old girl was killed, putting the death toll at seven. On Sunday morning, Getting said the girl was “severely, gravely” injured, but still alive.

Police believe the victims were selected at random.

The timetable of the shootings, according to Getting:

Police arrested 45-year-old Jason Dalton after a brief car chase. A weapon was found in his vehicle.
Newslook

“He seemed pretty even-tempered,” Getting said of Dalton’s demeanor at the time of his arrest and in questioning. “He did not present in a combative way or an emotional way at all.”

Dalton has no criminal record, Getting said. He said authorities were still working to establish a motive in the shootings.

“We are very confident we have the right person in custody,” Getting said. “There is signficant evidence to tie him to these activities.”

Getting said he would not identify the victims this morning as the process of notifying families continued.

Getting assured the community that there was no continuing threat. He said authorities have every reason to believe that Dalton acted alone.

Getting said police had checked along the route between the auto dealership and the Cracker Barrel, searching for other victims, but found none. Authorities were continuing to piece together the movements of the shooter in the four hours between the first and second shootings and the more than two hours after the third attack. 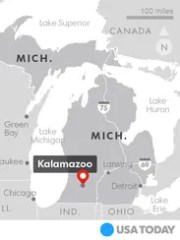 Chrissy Teigen Says She's Taking a Break From the Spotlight

How to watch the upcoming total solar eclipse across the Pacific