After a win over OSU on senior day, Denzel Valentine discusses what MSU must do to improve. Video by Joe Rexrode, DFP.

MSU’s senior guard hears of Mateen Cleaves promise in 2000, then echoes it 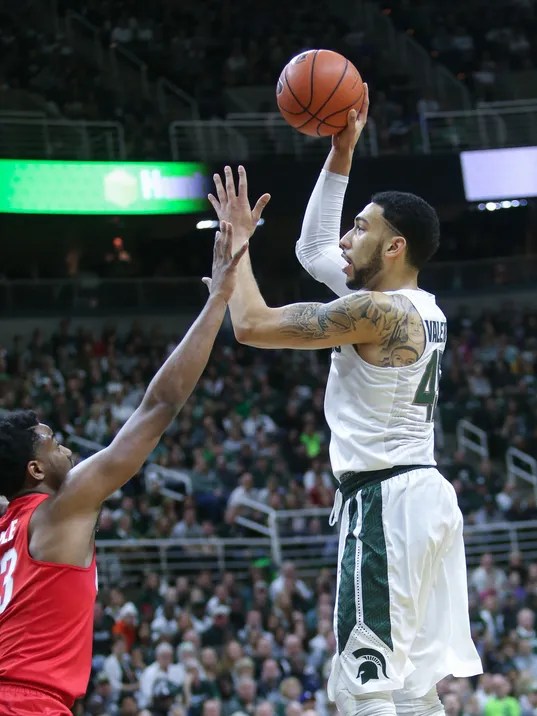 EAST LANSING — This is going to make some rounds, so the best thing to do here is give a full transcript of the conversation I just had with Denzel Valentine in the Michigan State locker room after MSU’s 91-76 win over OSU, resulting in Valentine’s “guarantee” of a national title. I’ll be Fishing Reporter in the script.

FISHING REPORTER: Did you have a speech prepared for the ceremony?

DENZEL VALENTINE: “Uh, I didn’t have a speech prepared, I was just gonna speak from the heart, really. Thank everybody that’s been along my journey and things like that.”

FR: Why didn’t you guys give speeches, did Izzo forget?

DV: “I don’t know, but he took a long time (laughing), so I was like … and everybody was itching to get out of there and things like that.”

DV: “Yeah. I mean, we have the team to do it. The only thing that’s gonna stop us is us. We’re gonna do our part.”

So there you go. For those who don’t remember that far back, by the way, Cleaves grabbed the microphone during his senior day speech and said: “We will win the national championship.”

I can’t say I’ve ever thought the Spartans will win it. Until now.

But the only guarantee coming from here is of relatively timely and grammatically correct stories about it.

Download our Spartans Xtra app for free on Apple and Android devices!