Home > HOME > Windsor: Can Red Wings, Pistons get in gear in time to reach playoffs?

They are motoring in different directions, but can these two teams do enough in the next two weeks to extend seasons?

They are going in different directions, our teams of winter. One desperate to keep a 24-season playoff streak alive, the other to get back to the playoffs — finally.

Each team has less than two weeks to go. The Red Wings play five more games, the Pistons seven. And each team plays tonight, at home, against scrappy Western Conference foes also fighting for playoff spots.

When the Minnesota Wild and Dallas Mavericks take on the Wings and Pistons, respectively, it’s our basketball team with the better shot at the postseason. It’s been a while since we’ve been able to say that.

The Wings, of course, have a shot, too. They always have a shot. They’re the Red Wings, and making the playoffs is what they do.

The issue here isn’t that the Wings are fighting for the fourth spring in a row to keep the playoff streak alive. The issue is whether you care.

Or have you become numb? Or immune? Or in need of a break from this annual chase to the middle?

Because with the Wings a point behind the Boston Bruins for third place in the Atlantic Division and two points behind the Philadelphia Flyers for the final wild-card spot in the Eastern Conference, about the best the Wings can hope for at this point is another early playoff exit.

Like the Pistons have until this year. Not that they are winning a title anytime soon, either. Still, the Pistons are trending in a better direction and, for the first time in six seasons, playing meaningful basketball in the spring. 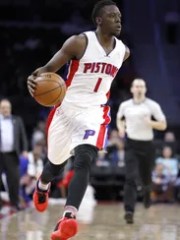 Not that long ago these two franchises used to carry our collective pride within the professional sporting landscape. The Lions were, well, the Lions. And the Tigers were lost in the desert.

But the Wings and the Pistons knew how to win. Consider: seven championships between them since the late ’80s. More trips to the conference semis or beyond. Division titles. All-Star players. Hall of Fame coaches. Playoff streaks.

The Pistons, obviously, are trying to begin a new one and, with a young, talented core in place, look set to do so. Entering Thursday night’s games, the Pistons held the No. 7 slot in the east, a half-game clear of the Pacers, 2 1/2 games ahead of the Bulls.

The remaining schedule favors Indiana and Chicago in terms of opponents’ records. But the Pistons have what those other two don’t: momentum. The Pistons have gone 7-3 during their last 10 games. They’ve shown fight and grit and an improvement on the defensive end.

Since acquiring Tobias Harris back in February, they’ve also shown more offensive versatility and have been one of the better scoring teams in the league the last six weeks. 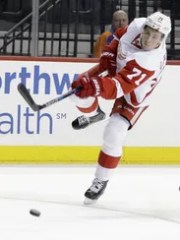 The Wings, meanwhile, can’t score. They can’t stop other teams from scoring much, either, both with shaky defensive play and inconsistent goalkeeping.

It’s pattern that should lead to a quick playoff exit, if they get to the playoffs at all.

The Wings play the Bruins next Thursday in Boston, in the penultimate game of the regular season. It’s likely those two teams won’t be separated by much more than they are now, and that game could act as a sort of play-in for the postseason, a playoff prelude before the playoff.

The Wings are used to this scenario at this point, as they’ve battled for the playoffs until the final few games each of the last three seasons. The Pistons aren’t used to this at all but relish the chance to fight.

Red Wings: Down the stretch

The Red Wings enter their last five games of the regular season on the outside of the playoff picture. Their best chance is to overtake the Bruins (whom they play next Thursday in Boston). Otherwise, they have to secure a wild-card spot.

There are no easy games in the NHL: The lowly Maple Leafs, whom the Wings play Saturday, recently have beaten Florida and Anaheim. The Flyers (whom the Wings host Wednesday) finish the season with four games in five days, while the Islanders play five times the last seven days.

Here’s a look at where the teams stood on March 31 and what’s left:

Five games left: vs. Minnesota, at Toronto, vs. Philadelphia, at Boston, at Rangers.

Five games left: at St. Louis, at Chicago, vs. Carolina, vs. Detroit, vs. Ottawa.

Seven games left: vs. Columbus, vs. Pittsburgh, vs. Tampa Bay, at Washington, at Rangers, vs. Buffalo, vs. Philadelphia.

Pistons: Down the stretch

Easy one: at Orlando.

Hard ones: Dallas, at Chicago, at Miami, Washington, Miami, at Cleveland.

The word: The Pistons are seeking their first playoff appearance since 2009.

Key guy: Reggie Jackson is shooting 35.2% from the field and 23.7% from three-point range during current 6-2 homestand.

Easy ones: Orlando, at Philadelphia, at Knicks, Brooklyn, Knicks, at Milwaukee.

Hard ones: Cleveland, at Toronto.

The word: According to the Indianapolis Star, the Pacers are 17-21 in games in which they are leading or trailing by three points in the final minute — the most losses in the NBA.

Easy ones: at Milwaukee, at Memphis, at Miami, at New Orleans, Philadelphia.

Hard ones: at Houston, Detroit, Cleveland.

The word: Thought to be Eastern Conference contenders, the Bulls are in danger of missing the playoffs for the first time since 2008.

Key guy: Jimmy Butler has struggled since returning from a sore knee. A return to form for the All-Star would help their chances.

Easy ones: at Phoenix, Brooklyn, Charlotte, at Brooklyn.

Hard ones: at Clippers, at Detroit, Charlotte, Atlanta.

The word: Losers of four out of five, the Wizards are fading fast. The Kings pounded them, 120-11, on Wednesday night.

Key guy: Bradley Beal hasn’t become the superstar that was expected. Injuries have plagued his career.