USA Today Sports travels across Brazil and finds out what action is being taken to combat Zika and its potential heartbreaking complications.
USA TODAY Sports 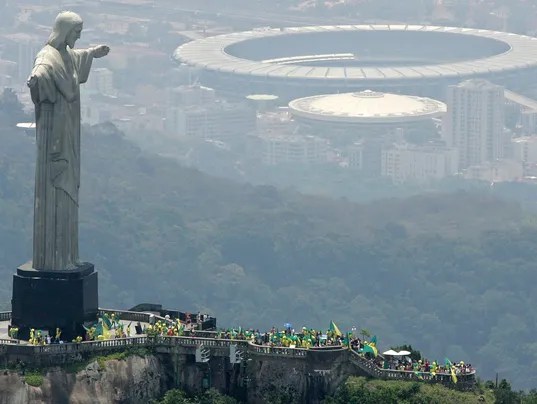 Concerns over the Zika virus have obscured infrastructure issues for this summer’s Olympics.(Photo: Andre Penner, AP)

RIO DE JANEIRO – Organizers of the 2016 Olympics are facing an uphill task in their bid to convince the international sports community that the Games will be spared the effects of the mysterious Zika virus.

Concerns over Zika, carried by the Aedes aegypti mosquito and thought to cause defects in newborns, have dominated recent discussion about the Olympics, which begin in Rio on Aug. 5.

And while Olympic organizers have devoted much energy to reassuring athletes and potential visitors, their position is not helped by the current realities of Rio life.

Fatima Teresa Goncalves dos Santos, a Rio businesswoman, told USA TODAY Sports how she contracted Zika last year, less than two miles from the Olympic Park where most of the sports will be staged.

“I was meeting a client when I was bitten,” dos Santos, 47, said through a translator. “It was in Barra da Tijuca, which is very close to where some of the Olympic stadiums are.”

For those who are not pregnant, Zika usually results in a brief period of discomfort, including rashes, itching and joint pain. Many medical experts say it enhances the risk of a mother’s baby being born with microcephaly, a neurological disorder that results in the child having an abnormally small head and suffering from seizures and impaired brain development.

Rio organizing committee spokesman Mario Andrada said there would be no danger of Zika to athletes or travelers, but urged extensive use of protective measures, especially mosquito repellent.

“(Zika) will not affect our Games,” Andrada said.

International Olympic Committee President Thomas Bach told reporters last week that no national federation had made any suggestion of a boycott, saying there was “no intention by any national Olympic committee to pull out.”

World Health Organization director general Margaret Chan told USA TODAY Sports that it will be safe for visitors to attend the Games. “Brazil will win,” Chan said, referring to the country’s fight against the Zika’s outbreak.

Yet mosquito issues are prevalent here. At the Vila Autodromo favela site, which adjoins the Olympic Park, locals are locked in a battle with the city to remain in their long-term homes. Rio officials want them evicted, with a luxury apartment building development planned for the site.

Sandra Souza, 47, showed USA TODAY pools of water that had collected amid the rubble of homes that have already been demolished. Each pool was swarming with mosquitoes. Such conditions are perfect for mosquitoes, including Aedes aegypti, to breed in.

“There are holes and trash and rubble here,” Souza said. “Nobody is cleaning it up. It is a miracle we did not have a Zika case yet.”

However, the United States Olympic Committee briefed its national sports authorities last week that athletes should give consideration to their decision to travel to the Games if they feared for their health.

U.S. women’s soccer goalkeeper Hope Solo told SI.com that she was monitoring the situation, but indicated she may opt against competing if the Zika issue does not improve.

Meanwhile, British Olympic chiefs have enlisted the advice of the London School of Tropical Medicine to help ready them for Rio.

Zika has been one of the hottest topics in international news for the past several weeks and has had the knock-on effect of taking negative publicity away from some of Rio’s other pressing problems.

With less than six months to go before the opening ceremony, there are still concerns over the readiness of key venues and transport infrastructure between the busiest areas of the city and competition sites. The polluted state of Rio’s water – where long distance swimming, sailing and rowing events will take place – is another major headache.

However, such factors have been on the back burner since the fear of Zika erupted.

While athletes have the backing of their sporting bodies to help them prepare for whatever Rio throws at them, Olympic tourists must be extra vigilant.

Andrew Picca, a medical student based in Claremont, Calif., is still considering the possibility of visiting Rio for the Games but said Zika’s spread had put him on alert.

“For me, the important thing is to stay aware of the latest medical information as much as possible,” Picca said. “You don’t want to take unnecessary risks with your health. But if everything is contained there is no reason to miss out on the trip of a lifetime.”

GALLERY: BRAZIL AND THE ZIKA VIRUS

How did Jim Iyke and Nadia Buari reunite?

Well that is somewhat interesting (30 Photos)

Join the revolution and burn your bra! (33 Photos)

GitHub wants you to shut up, so it added emoji reactions

Kate Upton Dresses as a Sexy Housewife for 'V' Magazine